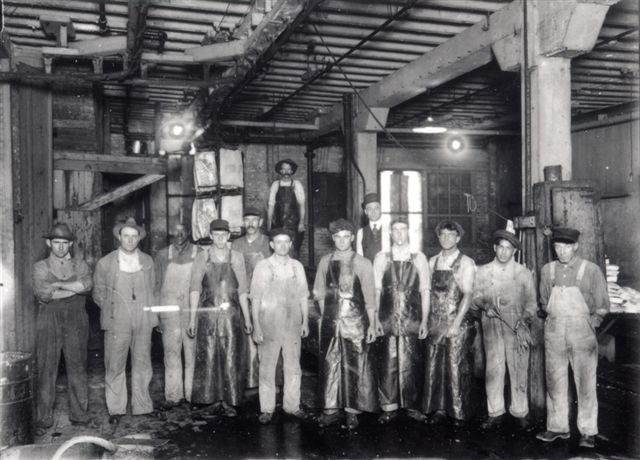 El Norte : The Growth of the North End

The rail yards of the Santa Fe resulted in a number of colonies or barrios emerging on the city's north side. In time, numbers of Mexican workers left the railroads for better jobs in nearby meat packing plants. One of the first plants in Wichita was Cudahy, located north of 21st Street on the east side of Broadway, and opened in 1901 and hired Mexican laborers very early in its history. Compared to the railroads, meat packing plants provided more stable year-round employment and were important factors in the establishment of Mexican American communities in Wichita's northern neighborhoods south of 21st Street, including El Huarache ("the sandal") along Mosley and a collection of families along Topeka.

In the 1920s and 1930s, Wichita's North End was one of the city's growing areas. The packing houses, railroads, a refinery, and other nearby industries provided jobs for a diverse population of Latinos, African Americans, and Anglos. The area was also becoming a hub of local businesses. Among them was the Nomar Theater, a Spanish Baroque-revival edifice on Market just south of 21st Street. The theater opened April 1929 and the Boller Brothers, noted theater designers, built into the Nomar equipment to show talkies. They also included a separate entrance for Mexicans and African Americans to access their segregated seats in the balcony.

What the North End also saw the development of important institutions that supported Mexicans and Mexican Americans in the area. Among the most important was Our Lady of Perpetual Help, located at 23rd and Market. Founded initially as a mission under the leadership of Fr. Jose Serrano, the parish started construction of its own church building in 1927. In the 1930s, the Franciscans oversaw the mission resulting in the construction of an elementary school in 1935 and a new, larger church building in 1937. The school offered education the 8th grade and was the main school for Catholic Mexican in the area children. In addition, Our Lady of Perpetual Help has been as place of social activities as well as sacred and educational ones. The women of the church have always held food sales at the church to raise money for the congregation. The other major religious institution was First Mexican Baptist Church, which began in 1919 through the missionary efforts of figures like J. J. Cotta and several of its early members coming from the Wellington Mexican American community. By the 1948, the congregation had grown enough to construct its own house of worship at 120 E 22nd Street.

To find out how the community developed after World War II, click here.