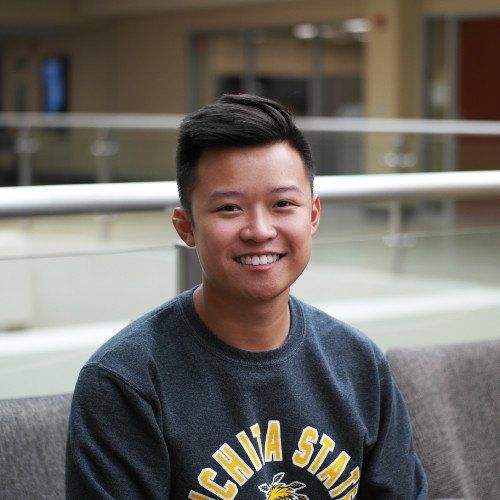 Wichita State student Jimmy Vu, a computer science major, has been interning with Ennovar, WSU's Institute of Emerging Technologies and Market Solutions, as a software developer.

The internship has allowed him to apply his studies to his work and gain a deeper understanding of his school work.

“It's definitely enhanced my studies,” he says. “Before the internship, it felt like I was learning because I had to. Now, I'm in the internship, applying what I'm learning and doing what I love. It feels like this is something that I want to do and keep getting better at.”

The internship gives Jimmy the opportunity to stay with Ennovar until he decides to leave or to get hired through a company they're partnered with.

He plans to continue through next summer and begin an internship he's already accepted with Koch Industries as an information developer. 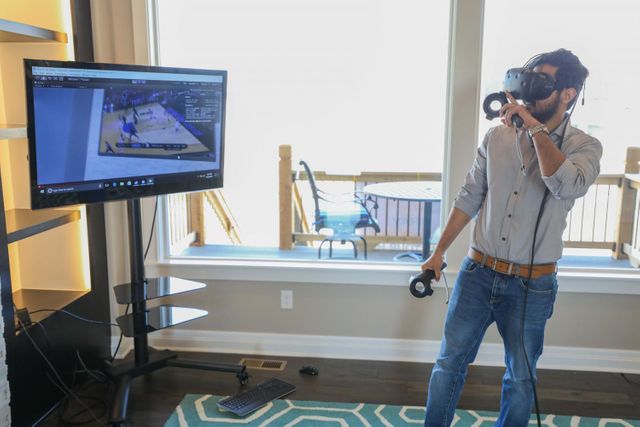 “If I had one or two days to make Flappy Bird I could.”

According to Humam Nameer, computer science grad student, Approximately 6,000 games are added every day onto the iTunes store in hopes of creating a phenomenon like Flappy Bird, a side-scroller game which accrued $50,000 a day after becoming popular.

Instead of making Flappy Bird in a couple days, Nameer said he worked 36 hours straight in order to put the finishing touches on a virtual reality simulation of a model home for Paul Gray, homebuilder and CEO of Paul Gray Homes, as an intern at GRIT Virtual Construction.

He was brought onto GRIT through Ennovar, a Wichita State University program which connects students to technology-focused companies in Wichita, in order to put Gray’s model home design in a user-friendly virtual environment.

GRIT is a company created by Chris Callen in order to offer services in virtual construction apart from his construction company, Builders Plus Construction. Nameer was brought on in early April in order to help with the “virtual immersion experience” service.

Callen needed someone experienced in Unity, a video game engine, so he contacted Ennovar.
“We’ve identified WSU as a place where we’d like to create a relationship,” Callen said. “Ennovar allows us extended access to expertise.”

Nameer was the man for the job. He already had three years of experience building video games in Pakistan—often using Unity—before coming to Wichita State, Callen said.

When Nameer heard Ennovar was looking for someone experienced in Unity he said he was jumping off of his seat for joy. The problem: he was then working as a front-end web developer for NetApp, a data management business.

While in Pakistan, he said he had worked for a gaming company with about 400 employees called 10Pearls. He helped create different games using Unity, including a few racing games and a shooting game.

After 8 months, Nameer said he switched to making mobile games within the company, where he learned about the 6,000 games per day figure.

“I actually made a game and it went viral pretty quick,” he said. “Suarez (a famous Barcelona soccer player) actually bit another player on the neck… so the game was just Suarez biting other players.”
In two weeks he said his game was downloaded half a million times, but the download rate dropped quickly dropped off.

“Luck plays a very significant part,” he said. “Even if you get all the results and everything you desire it still may not work out.”

Nameer said he decided to quit the video game industry in Pakistan since he was discouraged about how it functioned.

He decided to come to Wichita State after some friends told him about how much they enjoyed the college and eventually got his job at NetApp through Ennovar.

In order to leave NetApp for GRIT, Nameer had to train somebody else to take over his position.

He said he jumped at the chance of working for GRIT because he had already thought of a similar idea himself, integrating civil engineering with VR.

Callen said he got the idea to create VR of model homes on February 8th after presenting his start-up company GRIT at 1 Million Cups, a program designed to connect entrepreneurs.

Gray said engaging with the model home VR helped him realize some problems with his design. He said using the VR model also allows the buyer to check out the building spatially before it is built and gives them a chance to view different paints, furniture, carpeting and other housing options in real time.

In the future, Callen said he hopes to be able to load kitchen equipment into the simulation so buyers can mix and match. He said they also plan to add a color palette by loading in a Sherwin Williams paint catalogue so users can see how different paints look on the house.

Callen compared using VR to showcase a house to using Microsoft Word in order to edit a paper. He said using the VR program to change textures, paints and furniture is like using Word to change fonts and move paragraphs around.

Construction of the house is the printing of the paper, he said.

“It’s a very great idea and I’m very excited about it,” Nameer said. “It’s going to hit… we are on the cutting edge of technology.” 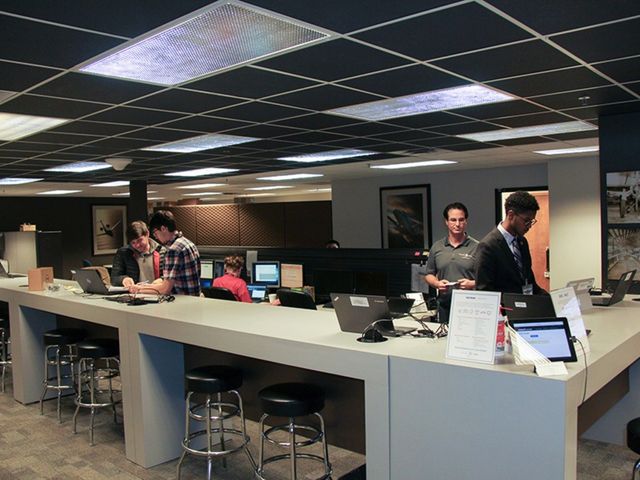 Wichita State students staff the Help Hangar at Textron Aviation to assist employees with a variety of IT-related issues.

Textron Aviation’s Help Hangar is where more than 60 Wichita State students work side by side with Textron employees to solve their information technology problems.

“Getting my foot in the door at Textron Aviation via the Help Hangar allowed me to get face time with potential employers and showcase myself and my abilities which led to an internship and direct full time hire at Textron Aviation as an IT Developer,” said Seth Layton, a Wichita State computer engineering major. “This avenue would not have presented itself had I not had the opportunities given to me by working for Ennovar at the Help Hangar.”

Textron Aviation is continually exploring ways to enhance interactions with employees who need IT help. The Help Hangar was introduced in 2017 as a service to assist employees with a variety of IT-related issues. Instead of explaining solutions over the phone, an on-site Help Hangar representative meets with employees directly to diagnose and solve issues on the spot, or refer them to the correct support team for resolution.

“We’re there to be a smiling face who helps (employees) through a rough situation,” said Trevor Rietcheck, a Wichita State computer science major and a member of Textron Aviation’s Information Technology Leadership Development Program.

Wichita State students benefit from the applied learning experiences and an emphasis on working effectively with customers.

In November, members of Wichita State’s administration and Textron Aviation’s management team met in to discuss Help Hangar’s progress and its future.

“The model out here is probably one of the best models I’ve seen as far as applied learning,” said Tom Rose, Ennovar senior technical manager. 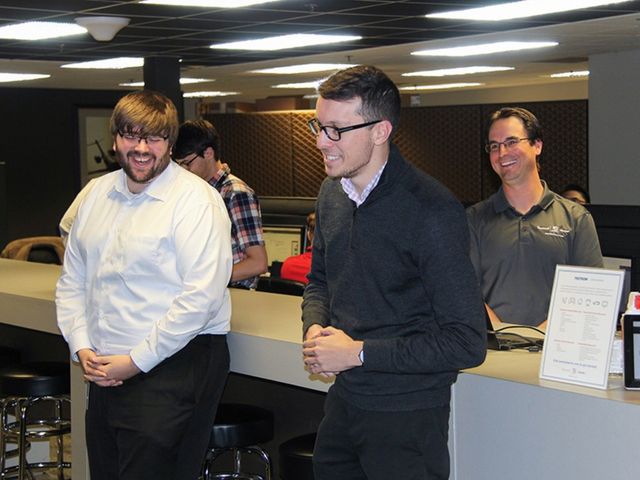 “We get everybody in here,” Layton said. “Sometimes, we even get people coming in here asking questions that didn’t pertain to IT. Because we are here, they have a face they could go to talk to and we help them. So, it is really just having the ability to physically connect with someone face to face instead of a phone call.”

The Help Hangar’s mission starts with face to face help for employees who can’t send an email, can’t get a computer to power up, can’t access a shared drive or a network mailbox. Preventative maintenance helps head off problems and keep employees from making return trips to the Help Hangar.

“A lot of those are rinse-and-repeat kind of things where you see them day in and day out,” said Rietcheck. “Our job is to address what they were coming in about, but also fix anything else that we might see. One of the mantras for Textron Aviation is: ‘Make IT easy.’”

The experiences with Ennovar and the Help Hangar fit with Wichita State’s applied learning mission.

“The Help Hangar gave us the opportunity to get hands on with the work environment outside of the classroom,” Reitcheck said. “We got the chance to work on issues that weren’t just hypothetical and required application of different skills that wouldn’t normally be practiced. The most impactful of those was actually the soft skills of face-to-face customer service. It required you to be able to problem solve on the fly while still being personable. These interactions allowed us to network outside of the college and get our names known in the industry.”

Textron Aviation benefits from the IT help, cost savings and building an employee pipeline. “Our customers benefit from a choice of options to fix IT issues,” said Chuck Passannante, vice president and chief information officer at Textron Aviation.

“We measure the effectiveness of the Help Hanger among our customers and consistently receive positive feedback,” said Passannante. “The Help Hangar and our relationship with WSU has caught the attention of other Textron business units as a best practice with respect to the employee experience. I’ve actually experienced the Help Hangar myself – it’s fantastic.”

The Help Hanger has locations on Textron Aviation’s east and west Wichita campuses, in addition to mobile units.

“The Help Hangar partnership is a prime example of how Wichita State’s applied learning model benefits students and industry partners,” said John Tomblin, WSU vice president for research and technology transfer. “Students are not only gaining hard skills and knowledge in their area of study, but also confidence, contacts and a grasp on the industry culture. And Textron Aviation is increasing employee productivity and satisfaction. As these students graduate, we hope many gain full time employment, keeping our best talent in Kansas.”