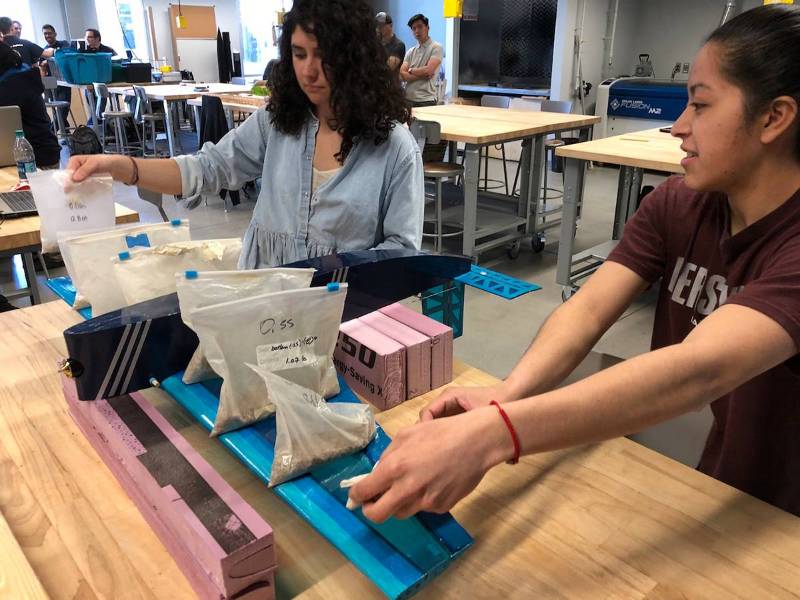 His vision became a reality nine years ago when he introduced the Bronze Propeller Competition, an event where teams use a small electric powered aircraft to meet competition objectives.

“I like competitions because it pushes the students,” said Miller. “There are always a lot of deadlines they have to meet and the competition element is cool.”

This competition gives students the opportunity to go through all the stages of the design process. Students come full circle from the idea through designs, prototypes, ground-testing, demonstration, flight and delivery.

“It's not just applying concepts that they've learned in previous classes,” said Miller. “It's also a lot of practical things that you can't learn until you really do them.”

This year's mission was titled “An Aerial Reforestation UAV.”

Boeing sponsored the competition, which made the incentive to win even higher. Not only does the winning undergraduate team get their names engraved on a traveling trophy with a real bronze propeller, they also receive $3,000 in prize money.

Past and current students participating in the competition feel their experiences in the class have been really valuable.

“Honestly this class, the whole experience is kind of amazing,” said Kevin Hagen, a graduate student whose team won the competition in 2016. “It's just an easy way to show potential employers that you actually have concrete skills that are valuable. It's nice that we all get something to show at the end of it.”

But it's not just about having something that will impress future employers, it's also about learning how to work as a team.

“I think it's definitely more hands-on than any of our other classes,” said Amber Fischer, a senior aerospace engineering student. “It's a really long-term process. We work with the same people for a year and I think that's one of the most valuable aspects of this class.”

Participants do not have to be part of Miller's class to join the competition. Any undergraduate student can assemble their own team and participate. High school teams and graduate teams are also welcome and can compete in their own division.

For more information on this year's winners and how to get involved in next year's competition, visit https://wsu.news/bronzepropeller.

On and off campus, Shocker engineering and computing students have access to the largest engineering co-op and internship program in the state. This puts real-world experience, college credit, a paycheck—and dream careers—with employers such as Airbus, Spirit AeroSystems, Koch Industries, Boeing, NASA, SpaceX, NASCAR and the U.S. Military all within reach.