Wichita State’s Dorothy and Bill Cohen Honors College is proud to announce nine recipients of the Koch Scholars Program for the fall 2022 semester. These nine recipients will each be awarded $30,000 over the next four years.

“Koch is thrilled to continue to foster opportunities for students throughout the Wichita community. The Koch Scholars Program provides students the opportunity to pursue an education where they can explore their passions, develop their unique talents, and achieve success,” said Koch Industries' Vice President of Public Affairs Meredith Olson. “Congratulations to this year’s scholars.”

The Koch Scholars program is a competitive program open to high school seniors enrolling in the College of Engineering or the W. Frank Barton School of Business. All Koch Scholars are also members of the Cohen Honors College and participate in community service and professional development activities throughout the year. Scholarship selection is based on high academic achievement, work, volunteer and leadership experiences, an essay, and an interview process.

Spencer Blaine, economics, Liberty High School, Kansas City, Missouri
Spencer is the son of Ryan and Marti Blaine. He is a member of the Liberty High School varsity basketball team, and also participates in National Honor Society. Spencer is one of two Parent Teacher Student Association student ambassadors and enjoys volunteering at the Hillcrest Hope Thrift Store, as well as working for his family’s travel agency, Pack Happy Travel.

In his free time, Spencer enjoys shooting baskets, fishing and enjoying the outdoors, or working out with his buddies. He intends to study economics and business administration while pursuing a career in strategic business development or corporate law. Spencer looks forward to utilizing the many resources available through the Cohen Honors College and is excited for the opening of Woolsey Hall.

Clayton Dudley, mechanical engineering, Andover High School, Andover, Kansas
Clay is the son of Chris and Angela Dudley. He is involved with Future Business Leaders of America and has been invited to compete at state three times and once for nationals. He is a flutist in both the Andover High School symphonic and marching bands. Throughout high school, Clay has been actively involved in Kids4Kids, Scholars Bowl, student council and debate. He currently works as a student lab assistant in the WSU Robotics and Automation Lab.

In addition to Clay’s interest in engineering, he looks forward to the education that the Cohen Honors College will offer as he hopes to study abroad and minor in political science. Outside of the classroom, he likes to play video games and hang out with his friends. After graduation, he plans to travel and experience other cultures worldwide.

Gannon Hall, finance, St. James Academy, Spring Hill, Kansas
Gannon is the son of Brian and Nancy Hall. He enjoys track, cross country and has competed at WSU in the 5A state 300-meter hurdles. He is a member of his school’s Spanish National Honor’s Society and has volunteered at many organizations the past few years and is currently a jury member at the Johnson County Youth Court.

While at WSU, Gannon looks forward to being a part of the National Student Exchange program and studying abroad. As a student, he will study for a degree in business finance. He is honored to be a part of WSU’s Honors College and to be enrolled in the Barton Business School.

Kathryn Kuhlman, computer engineering, Trinity Academy, Wichita
Kathryn is the daughter of Becky and Wade Kuhlman. During high school, Kathryn served as the student body president, a class representative and cheerleading captain. Kathryn is also a member of the National Honor Society at Trinity Academy.

Kathryn enjoys spending her free time with friends, cheerleading and learning about new technology. She hopes the honors program at WSU will enhance her education by pushing her to new academic hnines and equipping her to succeed in her future career. Kathryn also hopes to pursue a career in computer science and potentially cybersecurity.

Stewart McClelland, mechanical engineering, Lloyd V. Berkner High School, Richardson, Texas
Stewart is the son of Kevin and Carrie McClelland. He is an Orchestra Officer, vice president of the Construction Club, and community outreach manager for the National Honor Society. He also serves as a tutor for advanced academic courses and is a WSU Distinguished Scholarship Invitational finalist. In his personal time, Stewart is a mentor and merit badge counselor for his former scout troop and currently serves as president of Venturing Crew 728.

Stewart enjoys expanding his musical capability, exploring virtual game worlds, and tinkering with everything from Lego bricks to car engines. He is thankful to Koch Industries and the Cohen Honors College for the opportunities they provide and is looking forward to his future at WSU.

He plans to study mechanical engineering at WSU’s Cohen Honors College. He also wants to explore his love of math and physics and eventually pursue graduate studies. Sam hopes to develop a career as a mechanical engineer creating new, innovative solutions to the many complex problems of the modern world.

James Peterson, electrical engineering, Home School, Overland Park, Kansas
James has been interested in engineering since middle school but realized his appreciation for programming after joining FIRST Robotics Team 1825, where he has been the mechanical lead, driver, drive team coach and current programming lead. He is involved in the Overland Park Teen Council and was a youth liaison to the Overland Parks and Recreation Advisory Committee and was a delegate to the American Legion Kansas Boys State. James has been an active member of his church's youth group, is also a Civil Air Patrol cadet sergeant, and a national merit semifinalist.

In his free time, James enjoys programming web apps in JavaScript and playing board games with his family and friends. James is excited to join the group of intellectually curious WSU honors students.

Evan Rust, computer science, Staley High School, Kansas City, Missouri
Evan is the son of Wendy and Jason Rust and is the oldest of three siblings. During high school, Evan played golf for the high school team and achieved the level of Life Scout for Boy Scouts of America. Evan enjoys playing violin in the Staley Philharmonic Orchestra as well as performing solo piano pieces outside of school. He also likes to figure out how video games operate and has placed in regional e-sports tournaments for the game Rocket League. He is intrigued by the way music composition impacts video gameplay.

Evan has learned a lot from his high school computer courses, including rigorous courses like cybersecurity. His favorite languages are Java and Python, and he feels well-prepared to pursue a computer science degree from WSU. He believes the Cohen Honors College will set the important groundwork and provide a push for him to achieve at a high level in college and beyond.  He knew WSU was the right choice for him after visiting Shocker Studios and he looks forward to the unique opportunities offered there.

Akasha Schlicht, accounting, Junction City Senior High School (JCHS), Junction City, Kansas
Akasha is the daughter of Michael and Nina Schlicht. She plans to major in accounting at the Barton School of Business. Akasha is involved with a variety of activities including Junction City High School’s swim programs, acting as an executive officer of her senior class, and the apprentice for the JCHS VITA tax site.

Akasha is beyond honored to be a part of the Cohen Honors College and to have the opportunity to expand her academic experience to a higher level. She plans to apply what she learns at WSU when she eventually opens an accounting firm. 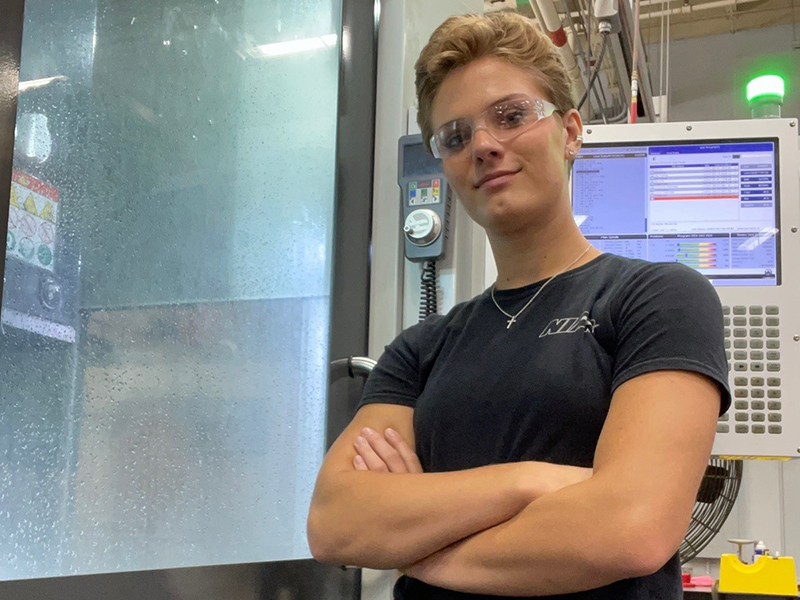 Beyond the Classroom: Sarah Laffen