Lucy Schneider is a sports fan who played volleyball, basketball and softball at Caldwell High School and loves the Kansas City Chiefs. She watches the Wichita State University women’s basketball team with a fondness because she is a resident assistant at Shocker Hall, where four of the team’s freshmen live.

In recent weeks, she learned to watch sports on TV with a new perspective. It takes collaboration, organization, and a flair for the theatrical to pull off a big-time event.

Schneider watches the small army of people running things on the sidelines because she is now one of those people. Schneider, a junior majoring in sport management, will work as floor manager for the women’s NCAA Tournament Regional Round basketball at Intrust Bank Arena.

“Watching the games and seeing all the staff and what they’re doing behind the scenes, it’s really apparent to me now,” she said. “Something I’m really excited for … is the celebration ceremony and the trophy presentation. It’s super-interesting to me to tie in with the TV side of things, but also the arena side of things and making sure the fan experience is well throughout all aspects.”

Schneider is one of around 12-15 Wichita State students volunteering for the practices and events surrounding three games.

On Saturday, top-seeded Louisville defeated fourth-seeded Tennessee 76-64 and No. 3 Michigan defeated No. 10 South Dakota 52-49. On Monday (8 p.m.), Louisville plays Michigan with a spot in the Final Four in Minneapolis at stake.

The students handle responsibilities ranging from organizing practice schedules to decorating locker rooms with NCAA and school logos. They work with media members on credentialing and seating. Some will run statistics. Some will assist photographers with rosters and armbands and keep them in  assigned spots that don't block the view of fans. For those planning on a career in athletics, the applied learning experience adds to their resume and gives them experience working a nationally recognized event with large crowds and a television audience.

“The opportunity to work a headlining event, like an NCAA Tournament, that’s kind of top of the food chain,” said Mike Ross, media coordinator for the tournament and assistant professor in Wichita State’s Department of Sport Management. “When you’re looking at graduating from school and going out into the industry, that vaults you into a different pool.”

They work with Brad Pittman, tournament manager, and senior associate athletic director at Wichita State. His work, along with Visit Wichita, Sedgwick County and the City of Wichita, has made Intrust Bank Arena a regular host for NCAA basketball. In addition to this season, Intrust Bank Arena hosted the women’s tournament in 2011 and the men’s in 2018. The men’s first and second rounds were scheduled for Wichita in 2021 before the tournament moved due to COVID-19. They will return in 2025.

Burden is considering many career options in athletics, including high school administration. Emerson, also in the sport management graduate program, would like to work in professional sports. Rundell, a sport management major, is intrigued by the facilities and event side of sports for a career.

“Any time you work an NCAA event, it’s a major thing,” Burden said. “Being able to see all this and set up one of the biggest events in the country, it readies you for just about any event.”

Emerson, who attended the University of Kansas for his undergraduate degree, said Wichita and Wichita State’s history hosting NCAA events is one of the reasons he chose to attend WSU. From watching the court installation to networking with NCAA employees, he is making an effort to use the experience to inform his career path.

“From a facilities standpoint, it’s cool that I get to go around and be with so many different departments so I can learn what each department does,” he said. “It’s interesting to be in the planning process and hear about all of it. I’ve talked to several of the NCAA liaisons to get a feel for what they’re doing. It’s a great learning experience.”

As floor manager, Schneider is responsible for duties such as getting teams on and off the court on time for practice, putting basketballs and towels in the right places, herding the media out after practices are closed and gathering equipment at the end of each day.

“I’ve been searching the (NCAA) manuals for certain aspects of what I’m supposed to do,” she said. “I’ve made a list of everything that I’m going to be doing and specific rules I need to remember. I plan to have that the day of, so I can reference it.”

Ross wants his students to take their lessons from classes and see how it translates into the real world this week. In his area, different credentials offer people permission to enter different parts of the arena, depending on job requirements. Members of the media require different seating or access to interview and locker rooms, depending on their outlet and job.

“It connects what happens in the industry and what they can expect on the job to what they’re learning,” Ross said. “It puts that seed into their mind about the things they’re learning in class and how it might apply on the job. That’s what applied learning is all about.”

Learn more about Sport Management at Wichita State.
Read more stories like this 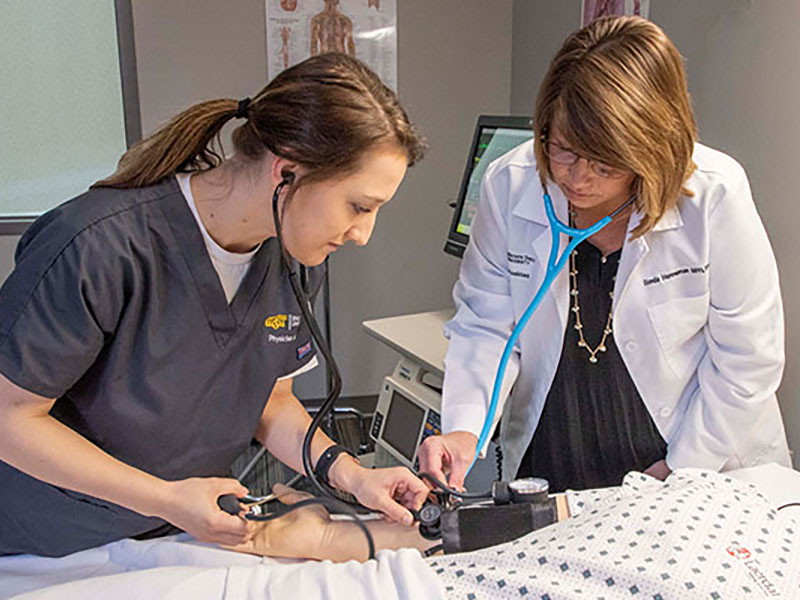