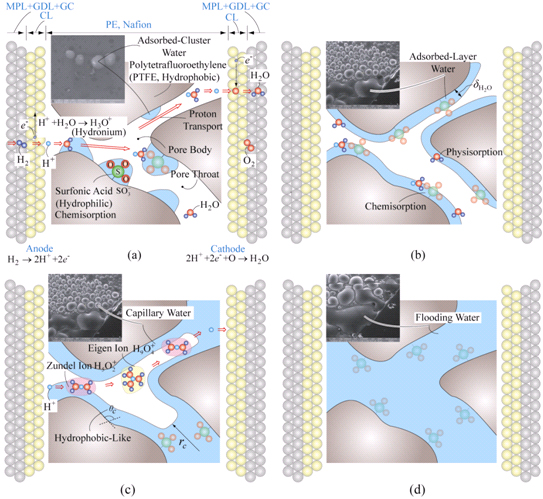 When gas is confined in spacing with characteristic length L comparable or smaller than its mean free path λf (average travelled distance without collision with adjacent particles), the effective thermal conductivity of the gas is reduced due to interaction of the gas particles with the confining surfaces. Condensable atoms/molecules are also adsorbed to the surfaces by interatomic/molecular potential near saturation temperature and this adsorbed layer influences energy and momentum exchange, i.e., the thermal aT and momentum au accommodation coefficients.

Figure Schematic drawing of heat transfer in gas-filled nanogap both at high (a) and low (b) temperatures. At low temperatures, the adsorbed layers are also shown. (c) 3-D snap shot of simulated Ar atoms (Nf = 600, KnL = 2.1) in the nanogap at = 85 K showing larger adsorption on the top cold surface, and (d) stereo view of the top and bottom surface showing larger adsorption at the cold surface.