M.A. in Anthropology from the University of Arkansas

Dr. Moore-Jansen began his studies in European Mesolithic Archaeology in 1972 at the Institute of Prehistory at the University of Copenhagen, Denmark. In 1975 he moved to the United States where he worked on the Cherokee Trail Lake project and at the Lubbock Lake Site, both in Texas. In 1979, He earned a B.A. in anthropology from Texas Tech University. After moving to Fayetteville Arkansas where he worked for the Arkansas Archaeological Survey while he attended the University of Arkansas, he earned an M.A. in Anthropology in 1981. His focus in cultural resource management had switched to biological anthropology and subsequently dental anthropology. He research focused skeletal analysis and dietary reconstruction from observations of microwear using scanning electron microspopy of human teeth. In1981 he moved to Knoxville to attend the University of Tennessee where he studied with Dr. Richard, Jantz, William M. Bass and Fred H. Smith. During his stay at Tennessee, he began intensive research in human osteology, technique, and data collection and analysis. While maintaining a focus on dental anthropological research, he studied skeletal morphological variation and quantitative analysis. Particularly, human craniometric analysis, dental variation, relative biological distance, sexual dimorphism and the effect of age on bones of the human skeleton. He engaged in a number of cemetery, battlefield, and prehistoric skeletal projects throughout parts of North America. Throughout, his stay at Tennessee, he became seriously engaged in forensic anthropological research and method and together with Richard Jantz, he helped construct the National Forensic Data Base currently housed at the University of Tennessee. He wrote manuals and co-wrote standards for data collection and methods of skeletal analysis in forensic anthropology. As an NIJ fellow and Graduate Research Assistant at Tennessee, he collaborated with Richirad Jantz on the construction and assembly of the fata base between 1985 and 1989. By the time of his departure, the data bank contained over 800 cases of forensic origin. 1989, he earned his PhD from The University of Tennessee after which he took a position at the Department of Anthropology at Wichita State University, in Wichita, Kansas. Here he established and temporarily funded a scanning electron microscope facility and soon he pursued more elaborate research in morphological variation, sexual dimorphism and age effects in the human skeleton. He also engages in human skeletal identification and inventory analysis on numerous archaeological investigations in collaboration with U.S. Department of the Interior (Park Service, Bureau of Reclamation, and Corps of Engineers). He has served as the forensic anthropologist to the reion of South-Central Kansas for the past 22 years, and he has consulted with a number of agencies outside this region, in and outside of Kansas during this period. He has worked on more than 150 forensic cases and he has developed a local research facility, Skeleton Acres, Research Facility (SARF) where he conducts research in mortuary and forensic anthropological investigation and recovery. He uses the site for teaching his classes in fieldwork and investigation, he uses the site for mock excavation and crimescene recovery, and performs training of law enforcement. He has undertaken a number of research projects including experiments in taphonomy, trauma, vehicular fires on skeletal and other materials. He became chair of the department in 1999 and he the biological anthropology program since the move to the current department facilities. He has developed a lab with a respectable skeletal collection including human and nonhuman remains. The lab includes photography, microscopy, and osteometric equipment, including a digitizer, calipers, osteometric boards, and digital microscopes. The collection also contains radiographic collections of hands and feet, chest x-rays (Aaronson Collection), dental casts, paleo casts, and nonhuman primate skulls. 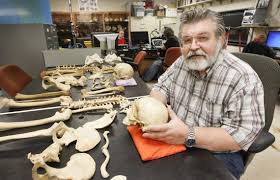