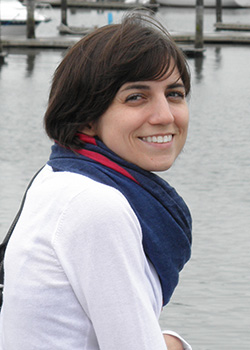 Rebeccah Bechtold is an Associate Professor of English with a Ph.D. from the University of Illinois in Urbana-Champaign. Her areas of interest in research and teaching include eighteenth and nineteenth century American literature and culture, soundscape studies, sentimental literature, and women's studies.

Dr. Bechtold’s research analyzes how antebellum authors used sound to negotiate the social tensions that afflicted nineteenth century American culture. Her work has appeared in Southern Quarterly, ESQ: A Journal of the American Renaissance, J19: The Journal of Nineteenth Century Americanists, and the New England Quarterly, among other journals. In 2016 she was awarded the Ralph D. Gray Article prize for her article, "A Revolutionary Soundscape: Musical Reform and the Science of Sound in Early America, 1760–1840,” published in a 2015 issue of the Journal of the Early Republic. In 2018 she was awarded the Jerome Stern Article prize for her article, "Feeling Right: The Limits of Sympathy and the Problem of History in Making a Murderer," published in a 2017 issue of Studies in American Culture.