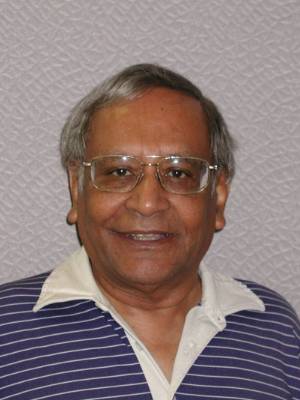 About the passing of Professor Hari Mukerjee--from a department colleague of his for thirty four years to those who didn’t have the privilege to know him.

I felt great sadness when I learned from our department chairman Professor Ziqi Sun that Professor Hari Mukerjee had died. But as I tried to deal with the tragic news of the loss of a very good friend, I reflected upon my 34 years with Hari as a colleague and most of my recollections made me smile. Since many who read this may not have known Hari very well or at all, I thought it appropriate to write a few words that will provide you some understanding of who we are losing from the Department of Mathematics, Statistics, and Physics at Wichita State University.

1988 was a good year for the Mathematics and Statistics department in that we are able to hire Professor Hari Mukerjee, Professor Tom Delillo and Professor Victor Isakov.

Hari was hired as an Associate Professor of Statistics. He had some graduate course work at U. Missouri, Columbia and later received his PhD in Statistics from the State University of New York at Binghamton in 1977. He had held some non-permanent positions in other mathematics or statistics departments at the Universities of Iowa, Arizona, U. California Davis, U. North Carolina at Chapel Hill, and CSAT/Cardenas, Tabasco, Mexico before joining WSU. I was the search committee chair for the open statistics position that Hari filled so I had the privilege of getting acquainted with him before most others in our department. Hari became a full professor in 1996. His research was initially in Probability but later expanded to Statistics with research interests in order restricted inference and in nonparametric density and regression estimation. He was the author of 42 research publications. During his 28 years at WSU, he oversaw the statistics offerings of our department and supervised the teaching of Stat 370. He was considered to be an excellent teacher who had received a best teaching award as a graduate student and at WSU a best teaching award nomination in 1997. He supervised three doctoral students and two masters’ students. He gave excellent service to the department, college, and university and was an excellent colleague. He retired in May 2016.

Hari continued coming to the department on a regular basis after his retirement as long as his health allowed it and I understand that he gave valuable advice to both (new) chairs Tom Delillo and Ziqi Sun when they sought his advice. He also kept doing research, publishing three papers after his retirement. He served as a mentor to younger members of our department. I understand that one of my colleagues chose to join our statistics faculty because of meeting Professor Mukerjee and being impressed during the interview process with his honesty and candor. After his retirement I would usually find Hari in the department office telling a story or recollection to our Administrative Assistants Deana and Janise. He was interested in my travels and in gaining information about where I had traveled, since he also loved to travel. He had a lot of knowledge about the US and other countries from his travels. He usually had a slight smile on his face which would broaden when he met somebody.

Hari was a very gregarious person. He loved to dance, and he loved music. He was an excellent cook and knew a lot about food and restaurants in various locales. For many years Hari would host an annual party at his home for faculty, department staff, GTA’s, and their spouses. Remembering Hari dancing and singing in his living room is one of my fond memories. Hari liked to send his friends emails containing something gleaned from the internet that Hari found interesting or ironic or funny. He had an interesting sense of humor and enjoyed a good joke. Hari was also a very private person, refusing recognition for accomplishments and (for example) refusing to have a retirement party. Overall, he was a main part of our statistics department for many years. I missed his presence in the department after he retired, and I shall miss him more now.