The Fairmount College newsletter is published two times a year. For information, contact Cheryl K. Miller, writer and coordinating editor, at 316-978-6659 or cheryl.miller@wichita.edu.

You’ll find events, photos and articles about our faculty, staff, students and departments. This map overlay outlines the likely area of Etzanoa. It also shows the route Spaniards are believed to have taken into the Wichita town and of a battle fought there in 1601.

The site, known as Etzanoa, is located near the conﬂuence of the Arkansas and Walnut rivers. It rivals the Cahokia site in western Illinois as one of the largest Native American settlements in North America.

“By joining the historical written record to the archaeology, we ended up rewriting both fields,” said Blakeslee. “Rather than a cluster of 30 little villages, there was a single town of 20,000 people.”

Research of the town has completely revised the understanding of protohistoric settlements, established 1400 to 1700 AD, in the southern plains. Previous scholars often dismissed the Spanish population estimates as exaggerations, but with the evidence of the archaeological finds they can no longer be discounted.

“One implication is that Old World epidemic diseases had not yet reached this region, but probably did so by around 1650, because there were far fewer Wichitas when the French arrived in 1718,” said Blakeslee.

Blakeslee reported archaeology that coincides with eyewitness accounts from five soldiers of Spanish explorer and founder of New Mexico, Juan de Oñate, who were interviewed in Mexico City in 1602.

Scattered surface finds match the description of the town as extending about five miles, and the description of the landscape and route of the Spanish army also line up. Over the years, researchers and local landowners have found multitudinous pottery shards, arrowheads and other hand-hewn flint tools. The biggest piece of confirmation came with the discovery of the site of a battle fought there in 1601. Metal detectors were used to uncover small iron shot from in front of the ravine where natives took shelter and well beyond it where shots eventually fell.

Blakeslee began work at the site in 2015 when he invited leaders of the Wichita tribe to visit and spent a week there researching. He’s been able to involve WSU students with the research as well and has taken them to the site each summer since.

In June, Mitchell Young, a senior majoring in anthropology, discovered a rusty horseshoe nail of Spanish origin at the site. Blakeslee hypothesized that it was probably traded between one of Juan de Oñate’s troops and an Etzanoan.

“Work at Etzanoa will continue for the rest of my career and beyond,” said Blakeslee. “It will be an important part of WSU’s future.”

Cheryl Miller contributed to this article. Mitchell Young, a senior in anthropology, found this Spanish horseshoe nail at the Etzanoa site. 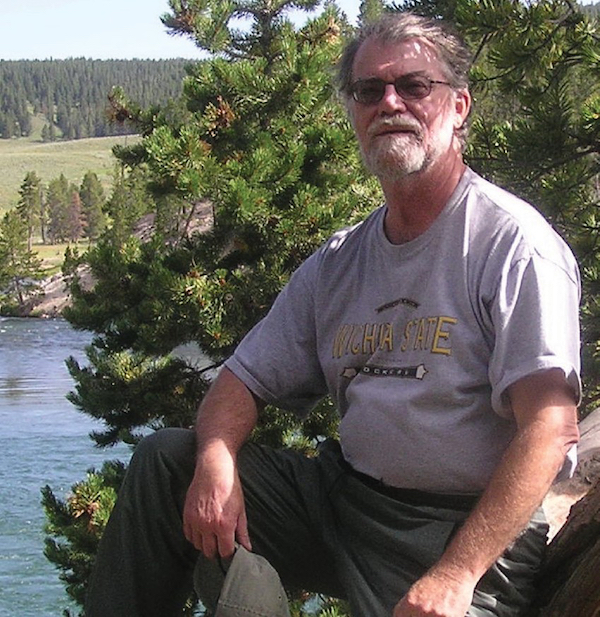 Long known as one of the leading archaeologists working in the Great Plains, Don Blakeslee, professor of anthropology, has broad research interests ranging from the time of the earliest settlement of the Americas to the historic period. Presently he is working on the archaeology of the ancestral Wichita people in Kansas between 1400 and 1700 AD, research that includes Etzanoa, one of the largest archaeological sites in the United States.

He became interested in archaeology as a young man.

Twelve weeks of camping in tents, digging in caves and on mesa tops.

He said the most fascinating aspect of the discovery of the Etzanoa site is that it has completely changed the view archaeologists hold of the people of the Great Plains at the beginning of the historic period.

“Previously, we were thinking in term of clusters of villages of a few hundred people each,” Blakeslee said. “Now we have a town of at least 20,000 people—which was just one town in Quivira—which controlled an area larger than the Republic of Ireland.

Blakeslee was interviewed on National Public Radio s “All Things Considered” about Etzanoa. You may listen to the interview or read the transcript at http://n.pr/2qeBmys.

The Youngmeyer Ranch in Elk County is preserved forever.

Through a voluntary agreement between the Earl W. Jr. and Terri Youngmeyer Family Foundation and the Kansas  Land Trust, the 4,676-acre tallgrass prairie property is permanently protected from development and will remain an ecological research site for Wichita State University.

“We are deeply indebted to the Youngmeyers and Kansas Land Trust,” said Bill Bischoff, professor of geology and former dean of Fairmount  College, at the official dedication. “We will share all knowledge we gain for the preservation and betterment of the tallgrass prairie ecosystem.”

The agreement, known as a conservation easement, was fnalized in December 2016. The dedication of the easement was celebrated on June 6 at the Youngmeyer Ranch. Representatives of Wichita State University, the WSU Foundation, local ranchers, and conservation and energy professionals attended.

The Youngmeyer Ranch conservation easement held with the Kansas Land Trust allows the property to remain a working ranch. The prairie may not be plowed under, although it may be grazed by livestock. The ranch may not be subdivided.

Daniel Offidani, trustee for the Youngmeyer Family Foundation, was instrumental in creating the conservation agreement. He said the Youngmeyers would be pleased with the easement.

“Earl and Teri did not have any children,” O”dani said at the dedication. “They didn’t have any close family that survived them. This ranch was their child and like most parents it meant everything to them.”

The greatest benefit to Wichita State is through research and educational capacities. Faculty and students have endless opportunity to study how Kansans can improve the sustainability of ranching and the enhancement of wildlife found in biologically rich areas like the Youngmeyer Ranch. This will benefit ranchers and  their  generations to come, said Greg Houseman, associate professor of biological sciences.

“Our research will address concerns in our region,” said Houseman. “Many think KSU and to a lesser extent KU are the only ones doing this type of research, but we are working to change that view.”

The Land Around Youngmeyer Ranch

According to Bill Bischoff, professor of geology and former dean, the rocks on Youngmeyer Ranch were formed during the Permian period, which occurred 240–280 million years ago. This area of Kansas was a warm, shallow sea, similar to that now found in the Bahamas. Life forms included fusilinids, brachiopods, crinoids, trilobites, and bryozoans, an abundant organism preserved in these rocks. For reference, the Appalachians were completed at the beginning of the Permian, a time of glaciation. At the end of the period, the largest mass extinction in geologic history took place.

Siberian traps, produced by an era of extreme volcanic activity, caused the mass extinction. Enormous food basalts released large amounts of carbon dioxide and sulfuric acid into the atmosphere. These chemical compounds acidifed the oceans and lowered their pH levels. In such a hostile environment, life forms could not secrete calcium carbonate, which is essential for forming exoskeletons.

The Youngmeyer land is still being shaped by geologic forces today.

The Youngmeyer Ranch provides rich opportunity for ecological studies by scientists. To date, surveys show the following numbers on the ranch: 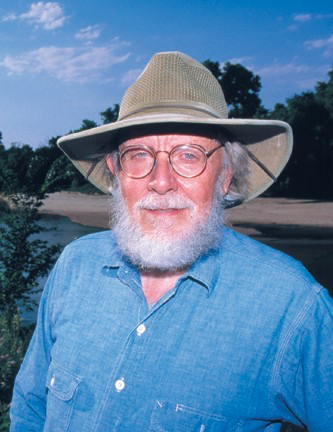 Paul Magelli, 89, died June 28. An associate professor of biological sciences for more than 50 years, he spent a good portion of his professional and personal life establishing, studying and maintaining the Wichita State University Biological Field Station: Ninnescah Reserve. Memorials may be made in Doc’s name to the charity or organization of the donor’s choice. 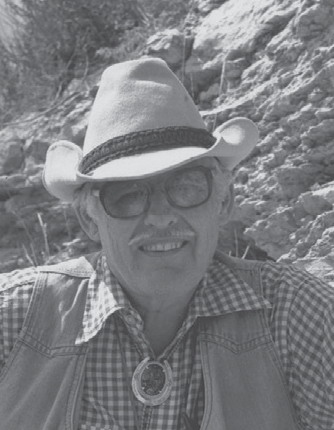 The past few months of 2017 have brought some real successes to Fairmount College. We entered into a successful full-on blitz to increase Wichita State and Fairmount College enrollments. Research and teaching are the core elements of academic life, and there have been noteworthy successes in this arena as well. The implications of Fairmount College faculty retiring and leaving employment in nearly record numbers over the past year has produced a rare opportunity for hiring. Fifteen faculty positions were released to more than half the Fairmount College departments that are now recruiting new people. This is a welcome event after nearly three years of almost no recruiting. New faculty and staff positions are like fresh air into departments and invigorate the college culture in ways few things can.

The hard work of many people across the university and Fairmount College has paid dividends on enrollment growth at WSU. Hundreds of administrators, faculty, staff, and students committed to a Strategic Enrollment Management plan during academic year 2016-17. The results have been remarkable; WSU’s enrollment grew by more than 4 percent, which is equivalent to more than 600 students. WSU’s growth led all the universities in Kansas and allowed us to engage new populations of students seeking credentials and skills to enhance their lives.

Fairmount College led the way in these innovative initiatives, and is also playing a critical role in instruction and creative curricular initiatives. Fairmount College enrollments were essentially fat for the fall of 2017, but we are grateful to have moved a slightly downward trend from the past two years to a stable enrollment pattern. While many arts and science colleges across the nation are losing students and credit hours, we are holding our own in arts and science enrollments. I consider this a great “win” of our college and faculty.

Research is part of the life blood of WSU, and Fairmount College faculty and staff are clearly some of the leaders in this activity. Already in academic years 2017 and 2018, faculty and staff in Fairmount College have garnered more than $13 million in research funding. Thanks to large grants in biology (George  Bousfeld’s $8.6 million) and psychology (Rui Ni’s $1.7 million), the college is o¡  to a banner year in research. All this research activity is complimented by continuing excellence in teaching the nearly 4,100 degree-bound students in Fairmount College. Many faculty and sta¡ are teaching more classes and students with fewer resources, and I commend them.

The significance of 15 recently-released faculty positions in Fairmount College cannot be overstated. Needless to  say, as dean I have become more popular of late due to the potential infux of new talent into our departments. I am hoping we fnd exactly the people we are looking for in critical areas that will continue to feed our growth and success. Students in our college and classes challenge the status quo and require that our faculty grow and develop in ways that parallel the changes in our student population. Thirty percent of our students report being a member of racial and ethnic minorities, and 20 percent are 30 years of age or older.

In closing, I am announcing my retirement from Wichita State University and my current position as dean of Fairmount College, e¡ective June 30, 2018. I will leave WSU with a full heart—full of gratitude for the opportunities and a sense of accomplishment both as a professor and administrator. I also write this with a grateful heart—grateful to you, our dedicated alumni and friends who bring resources to the college that facilitate our success, and grateful to our faculty and sta¡ who do the remarkable work with students, who, after all, are the reason we are engaged.