Add to Your Calendar 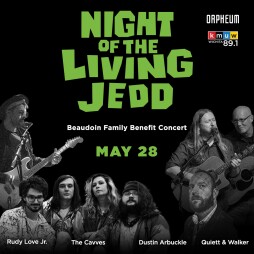 KMUW is partnering with Wichita’s Orpheum Theatre to present a benefit concert on Saturday, May 28, for Jedd Beaudoin and his family after they lost their home in a devastating fire. Night of the Living Jedd: A Beaudoin Family Benefit features performances by Rudy Love, Jr., Quiett & Walker with special guest Dustin Arbuckle, and The Cavves.

KMUW's Jedd Beaudoin is the host of the locally-produced, nationally-syndicated radio show Strange Currency. Jedd is also a music journalist and critic, and a huge advocate and supporter of the local music scene. When word got around about his family’s unexpected loss of not only their entire home and all personal belongings, but several beloved pets as well, people were quick to step up and offer to help put together this benefit show.

About the musicians
A singer/songwriter/keyboardist with deep musical DNA, Rudy Love Jr. has developed a distinctive voice, giving his all with every performance. Quiett & Walker is the acoustic duo, Terry Quiett and Guinn Walker, who are performing live together for the first time since 2016. They’ll be joined on stage by local blues-roots rocker, Dustin Arbuckle. Self-proclaimed landlocked surf rockers, The Cavves, close out the show.

Tickets
Tickets are priced at $30 for general admission and can be purchased through Select-A-Seat, online at selectaseat.com, by phone at 316-755-SEAT, and in person at the Select-A-Seat Box Office at INTRUST Bank Arena. All proceeds from this concert benefit the Beaudoin family to help them rebuild after the fire that destroyed their home.

Auction Donations
The Orpheum and KMUW are also working together to include a silent auction and/or raffle for items to help raise additional funds at the event. If anyone is interested in donating, please contact Stacee Olden at stacee@wichitaorpheum.com or 316-771-7993.

Haven’t been to campus lately? Rediscover Wichita State and take advantage of all the events, resources and fun open to the whole community.