WuShock is a big, bad, muscle-bound bundle of wheat. He's been WSU's mascot since 1948, a friend to every Shocker fan and the No. 1 supporter of all things Wichita and Wichita State. 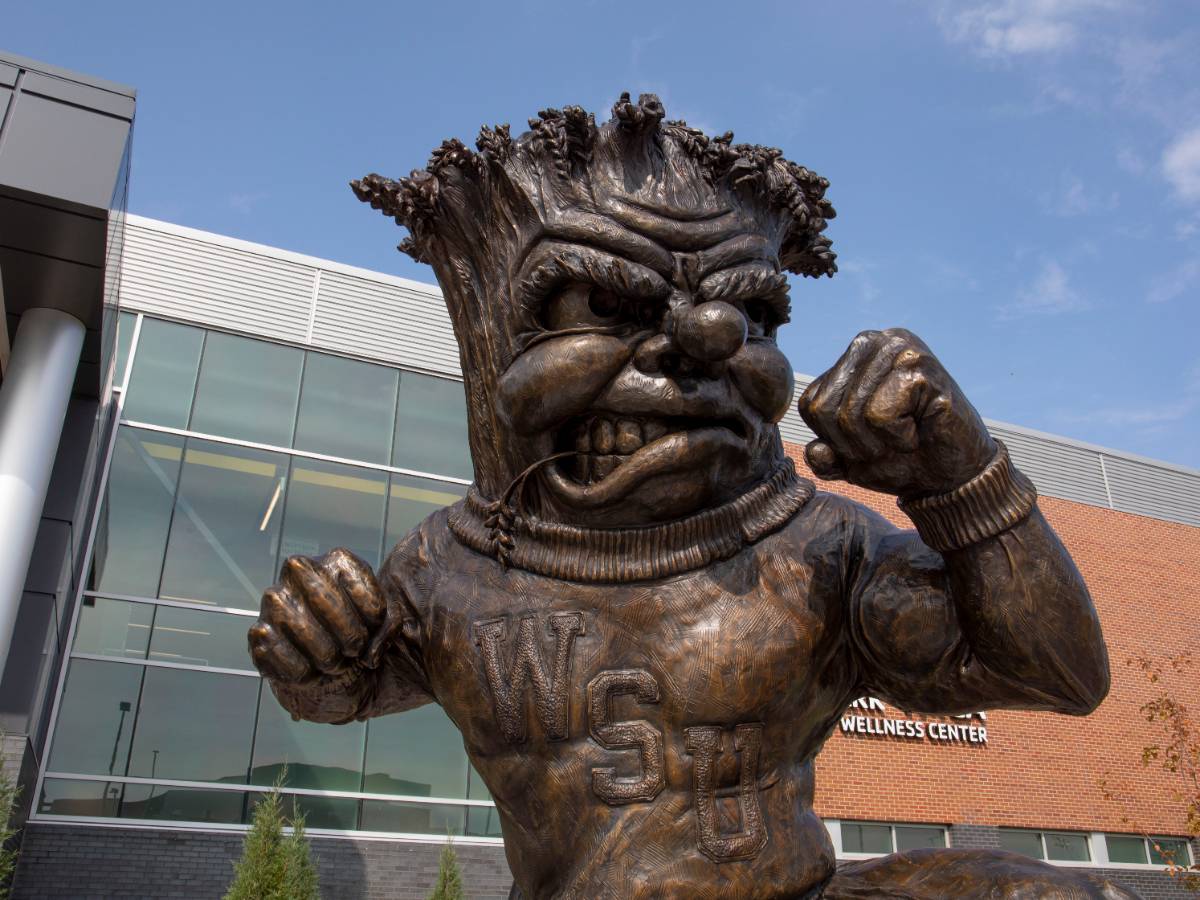 WSU's main campus is now home to a larger-than-life sculpture of WuShock at the entrance plaza of the new Steve Clark YMCA and Student Wellness Center, thanks to Clark – a longtime Greater Wichita YMCA board member, volunteer and donor – for whom the area’s tenth YMCA branch location is named.

Local artist Wade Hampton and sculptor Connie Ematt worked with WSU Athletics and Clark create the bronze sculpture. A documentary about the creation of the sculpture won "Best Kansas Documentary Short" at the 2020 Tallgrass Film Festival.

Wichita State University, formerly Fairmount College, received its first mascot name about the time it received its first football coach. Tradition has it that in 1904, football manager and student R.J. Kirk needed a name for the team in order to advertise Fairmount's upcoming engagement with the Chilocco Indians. He came up with Wheatshockers.

At the time, many Fairmount football players earned tuition and board harvesting, or "shocking," wheat during the summer harvests, so the name seemed appropriate. Early football games were played on a stubbled wheat field. Pep club members were known as Wheaties.

Although the Wheatshockers name was never officially adopted by the university, it caught on and survived until it was later shortened to Shockers. Until 1948, the university used a nameless shock of wheat as its symbol.

WuShock came to life in 1948, when junior Wilbur Elsea won the Kappa Pi honorary society's competition to design a mascot typifying the spirit of the school. Elsea, who had been a Marine during World War II, decided that "the school needed a mascot who gave a tough impression, with a serious, no-nonsense scowl."

Once Elsea's mascot was adopted by the university, which by that time was known as the Municipal University of Wichita, all that was needed was a name. The Oct. 7, 1948, issue of The Sunflower, the student newspaper, ran an advertisement urging students to submit names for the school's new mascot. It was freshman Jack Kersting who suggested the winning name, "WuShock."

In 1998, WuShock, also referred to as "Wu," marked his 50th birthday by undergoing a redesign and getting a pumped-up physique and revved-up attitude. The mascot's costume has changed over the years, as well. With the redesign, a new costume was introduced in fall 1998. In fall 1999, the head of the new costume underwent another redesign after a number of supporters suggested the mascot needed a more intimidating look. (In 2005, this version of WuShock was singled out by Sports Illustrated as one of college sports' worst mascots.)

Wu got one more facelift in 2006, owing mostly to the unwieldy costume's top-heavy tendency to exhaust and endanger its human component. (Yes, there is a person inside the costume.) The new Wu looks strikingly like the image on the logo, and is gradually endearing himself to his legions of fans.