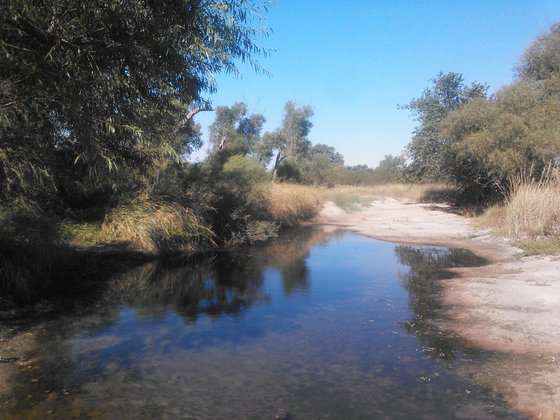 On 27 October, 2004, an eight inch diameter pipeline, the Enid Lateral, owned by Magellan Midstream Partners, L.P. and operated by Enterprise Products Operating L.P., that is utilized to transport anhydrous ammonia, ruptured approximately two miles west of Waterloo, Kansas (approximate coordinates of 37.678634, -97.981739). Upon rupturing, a vapor cloud approximately 0.8 km (0.5 miles) wide traveled down an unnamed riparian corridor. On the evening of the rupture, a 3.81 cm (1.5 inches) rainfall event caused ammonia to enter Smoots Creek by traveling through an unnamed tributary approximately two miles downstream from the western edge of the property. It was reported that at least some impact occurred to the aquatic communities for approximately 14 miles of Smoots Creek and an undetermined impact of at least a portion of the South Fork of the Ninnescah River. As part of a mitigation settlement with Magellan Midstream Partners, L.P. the above described property located in Section 23 was acquired by the Wichita State University Foundation in 2008 as part of a conservation easement with Mrs. Joan A Gerber in collaboration with the Kansas Department of Health and Environment (KDHE).

The Conservation Easement makes reference to “significant natural, scientific, educational, habitat, wildlife, wetland, and aquatic ecological vales…” and of significant importance is critical habitat for the Arkansas Darter, Etheostoma cragini, which is protected by the Kansas Nongame and Endangered Species Conservation Act.

Ongoing research and future prospects: The site has revealed the first documented case of chytrid fungus in Kansas (Dr. Jameson lab). The only long-term study underway is a survey for amphibians and reptiles. The site is well-suited to studies of remnant sand prairie whereas the upland-stream interface provides an excellent opportunity to study stream hydrology. For example, the tree removal designed to restore historical conditions found in such prairie streams could potentially be compared with upstream and downstream areas where tree removal was not undertaken.