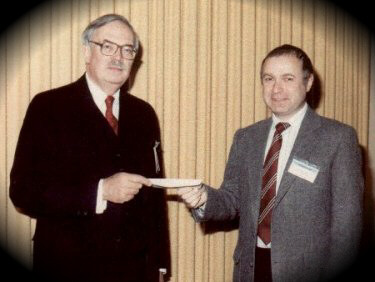 The Lecture Series began on October 12, 1987 with the lecture "Sound Waves in Fluids" by Professor Garrett Birkhoff of Harvard University. Professor Birkhoff authored numerous books, including A Survey of Modern Algebra and Jets, Wakes, and Cavities, and many research articles. To date, speakers from 30 states and 14 foreign countries have lectured in our series. Some of these lecturers were faculty members at such prestigious universities as Harvard University, M.I.T., New York University, Stanford University, and Yale University. Other lecturers represented companies such as Bell Labs, Boeing, Cessna, Exxon, IBM, and Koch Industries. Attendees to lecturers in this series have included faculty and students in the mathematics and other departments as well as engineers from high tech companies in the area. An excerpt from the December 11, 1987 Boeing Times is "Naranjan Rao, specialist engineer working on trajectory generation and optimization, attended a recent lecture and, based on the speaker's presentation, formulated a possible solution to a problem on which he was working."

On November 27, 1989, Professor Efim Zelmanov, Yale University, described his complete solution of the classical restricted Burnside problem in algebra. His research was recognized with one of the top mathematical awards - the Fields Medal - in 1994 (International Mathematical Congress in Zürich). On April 5, 1996, he spoke again on progress in an area close to the classical Burnside problem in group theory.

On November 5, 1993, Professor Daniel Tataru, Northwestern University presented his solution of a longstanding problem in the theory of partial differential equations about the sharp uniqueness domain in the (time-like) Cauchy problem for hyperbolic equations with time-independent coefficients. Unifying methods of top analysts (Hörmander, Robbiano), he used the "heat equation" transform to show that uniqueness is the same as in the classical Holmgren-John Theorem for equation, with analytic coefficients.

Professor Leon Ehrenpreis of Temple University, a world-renowned Mathematician, used to regularly visit our Department. While here, he delivered lectures, consulted, and did research in cooperation with several faculty members and graduate students. Among the topics he presented were: Nonlinear Radon Transform, Hypergeometric Functions, Singularities of Solutions of Partial Differential Equations.