The Big Lie: Nazi propaganda, Antisemitism, and the coming of the Third Reich

After losing the 2020 U.S. Presidential election, Donald Trump spent months falsely claiming the election had been stolen from him. And despite all evidence to the contrary, many of his followers believe him (still). The historical parallel to this conspiracy were Nazi efforts to blame Jews for German defeat in WWI. During the 1920s and 1930s, the Nazis fulminated against the Jewish ‘traitors’ and ‘November Criminals’ who supposedly ‘stabbed Germany in the back,’ and through such falsehoods, generated tremendous popular support. In both cases, propaganda was essential in magnifying dishonest claims. In exploring how the Nazis used ‘the Big Lie’ to gain support, this talk examines the role which propaganda and antisemitism played in the coming of the Third Reich, and the lessons which historical comparisons can provide for the present.

Jeff Hayton is an Associate Professor of Modern European History at Wichita State University. His work focuses on the intersection of sounds, subcultures, and society in postwar Germany. He has publishednumerous articles on popular culture, rock ‘n’ roll and German history. His first book, Culture from the Slums: Punk Rock in East and West Germany, will appear with Oxford University Press in 2021. He is beginning work on his next two projects: a study of the rise and spread of Neo-Nazism in divided Germany since the 1960s; and an exploration of the relationships between video games and German history. 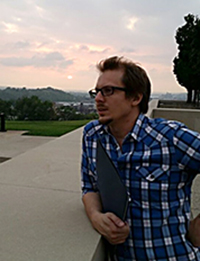