In August of 2019, US Army soldier Glen Oakley ran toward gunfire echoing from an El Paso Walmart, grabbed an armful of children, and carried them to safety. In July, a Philadelphia man with a cracked hip climbed 15 floors to save his mother from her burning apartment building. In 2018, James Shaw Jr. wrestled an assault rifle away from a Nashville-area Waffle House shooter who’d killed four people.

Despite these and other examples of heroism, the black male media narrative remains one of poverty and violence, a narrative relentlessly defining black men by their challenges instead of by their achievements. These old, virulent narratives stigmatize and even destroy lives.

Why else are black children the face of poverty when 65 percent of poor children aren’t black?

The Army says black men serve at the highest rates. Why aren’t black men the face of patriotism?

The Centers for Disease Control says black men are the men most involved in raising their children. Why aren’t black men the face of fatherhood?

Negative narratives accumulate into what Trabian Shorters, CEO of BMe Community, calls “deficit framing” or defining people by their challenges.

Perhaps that’s why police peacefully arrest white mass murderers, but shoot unarmed black men. Or why innocent but dead black men like Botham Jean, killed in his Dallas home by an off-duty officer, have their personal lives ruthlessly interrogated.

It has become chic to suggest that micro-aggressions are mere annoyances, but they accumulate.

And they can kill.

Mark McCormick is the director of strategic communications for the ACLU of Kansas. Previously he served as the executive director of the Kansas African American Museum in Wichita.

McCormick is a New York Times best-selling author with more than 20 years of experience as a reporter, editor and columnist, and for 14 years worked as a journalist at The Wichita Eagle. He serves as a trustee for the University of Kansas William Allen White School of Journalism and Mass Communications and has served as a professional-in-residence at the University of Oklahoma.

In 2015, McCormick published Some Were Paupers, Some Were Kings: Dispatches from Kansas, which was selected as the Common Read for Wichita State freshmen in 2020. 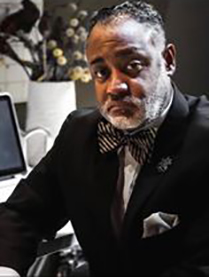