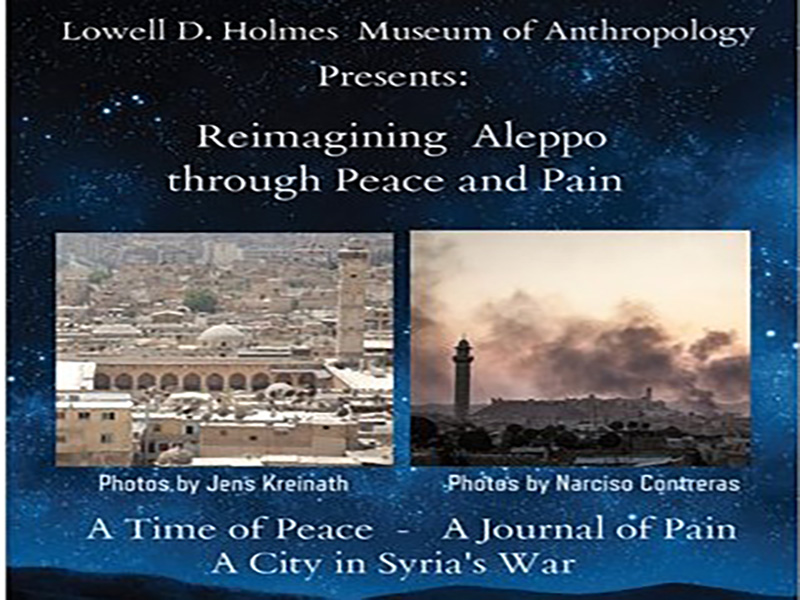 Reimagining Aleppo Through Peace and Pain

The opening of the exhibit “Reimagining Aleppo through Peace and Pain: A City in Syria’s War” took place on Monday, April 29, 2019, on the second floor of Neff Hall.

It was organized by director of the Lowell Holmes Museum of Anthropology, Rachelle Meinecke, and Dr. Jens Kreinath, associate professor at the Department of Anthropology at Wichita State University. This exhibit was made possible through the generous funding of the David and Sally Jackman Foundation at Wichita State University and the dedicated work of three undergraduate students, McKenna Douglass, Bailey Fimreite, and Jeff Leddy that finally bought this exhibit to fruition.

The exhibit features “A Time of Peace” with photographs Dr. Jens Kreinath took during a day trip to Aleppo on May 29, 2010. This selection of pictures conveys a tranquil atmosphere and is contrasted directly with photographs by world-renowned war photojournalist Narciso Contreras. The photos by Contreras – named “A Journey of Pain” and taken in 2012 – are from the very frontline of the battlefield and capture unfiltered moments of utter despair as experienced by the inhabitants of the once-glorious city that is now drawn into the fray of Syria’s merciless war.

The exibit is on display on the second floor of Neff Hall.