More than 200 students contribute to the musical environment of the Wichita State University Bands. A rich variety of experiences are created for listeners and participants alike. Concert ensembles include the Wind Ensemble and Symphonic Band. The Athletic Bands consist of “Shocker Sound” Basketball Band and "Shocker Sound Machine" Marching Ensemble. 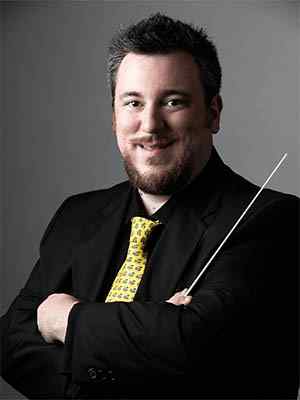 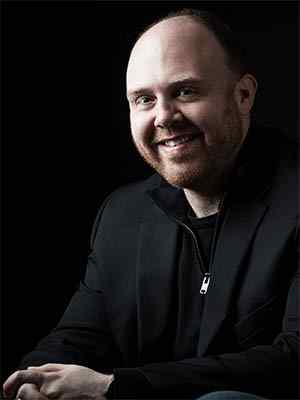 Associate Professor, Director, School of Music and Director of Bands

Interested students should check out our future students page or click below to find out more about auditioning for the School of Music.

We ask that Graduate Students contact their respective faculty member(s) to schedule the necessary steps to join us. Feel free to check out our Graduate page for more info! 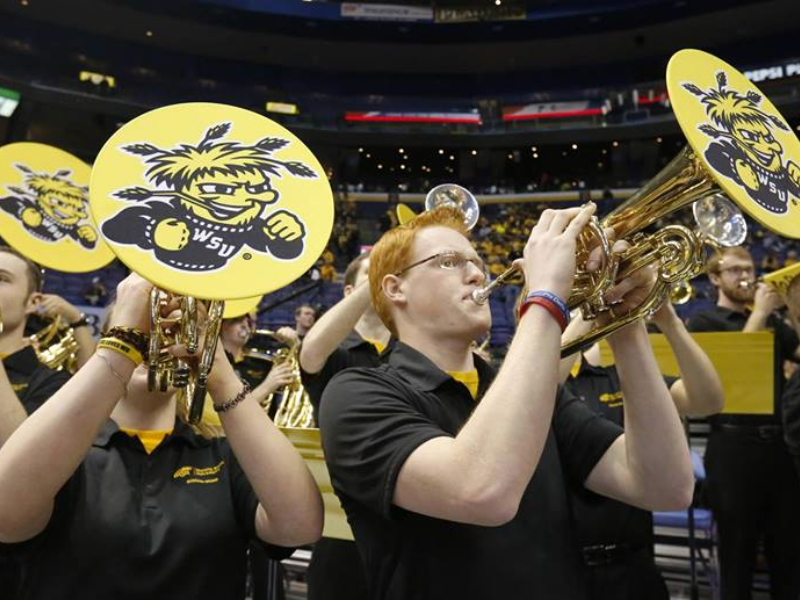 The WSU Athletic Band Program has a storied history. The award-winning Shocker Sound Basketball Band has been in existence for over 50 years! They're responsible for bringing down the house in Koch Arena for Shocker Athletic events. Don't miss being a part of this fun, entertaining, and exciting ensemble! Students are eligible for participation and travel with the band to basketball tournaments provided they are enrolled as a student at WSU. With an instrumentation of Saxophones, Brass, Drumset, and Electric Bass, Shocker Sound performs for all games for the Shocker Volleyball and Men and Women basketball teams. There are approximately 10 volleyball games, 20 men’s games, and 20 women's games each season, excluding tournaments.

The Vision for the WSU Athletic Bands is to have over 100 members of the Wichita State University student body working together to provide entertainment and excitement at Shocker Athletics events and around our local community and region. Students involved will be a part of ensembles that respect the traditions that make us who we are as well as forge new roads in education, performance, and entertainment.

In Fall 2018 the Athletic Band program saw a significant enhancement with the addition of the Shocker Sound Machine! Shocker Sound Machine is a high-octane, explosive, and adrenaline-inducing marching ensemble that performs at Shocker Basketball Games, regional and local events, and special occasions. Watch out! They're everywhere!

Shocker Sound Machine is an ensemble without a definition. Taking its inspiration from Dance, DCI, WGI Winds, Broadway's Blast, as well traditional marching techniques and styles - Shocker Sound Machine dazzles audiences with their energy and virtuosity. Adding woodwinds to the instrumentation from Shocker Sound, enhanced with a System Blue Drumline, and outfitted by Fruhauf, the performances are dynamic and virtuosic. Be sure to check our FAQ for more info!

Shocker Sound Machine is ramping up for its 5th anniversary season!

This year's concept will be a GENERATIONS themed show, celebrating the marching traditions of the original Shocker Bands pre-1986, when the program ended, all the way to NOW in 2022!

Location information will be emailed to you.

We would love to have you experience the Shocker Sound Machine with us in this milestone season!! Please fill out the google form here so we can get you locked into the roster and get show music sent to you!

If you are in need of a marching instrument (sousaphone, baritone, mellophone, etc.) or have questions about the ensemble or membership, please reach out to Lucas Hulett, Director of Athletic Bands, to line that up!    Lucas.hulett@wichita.edu 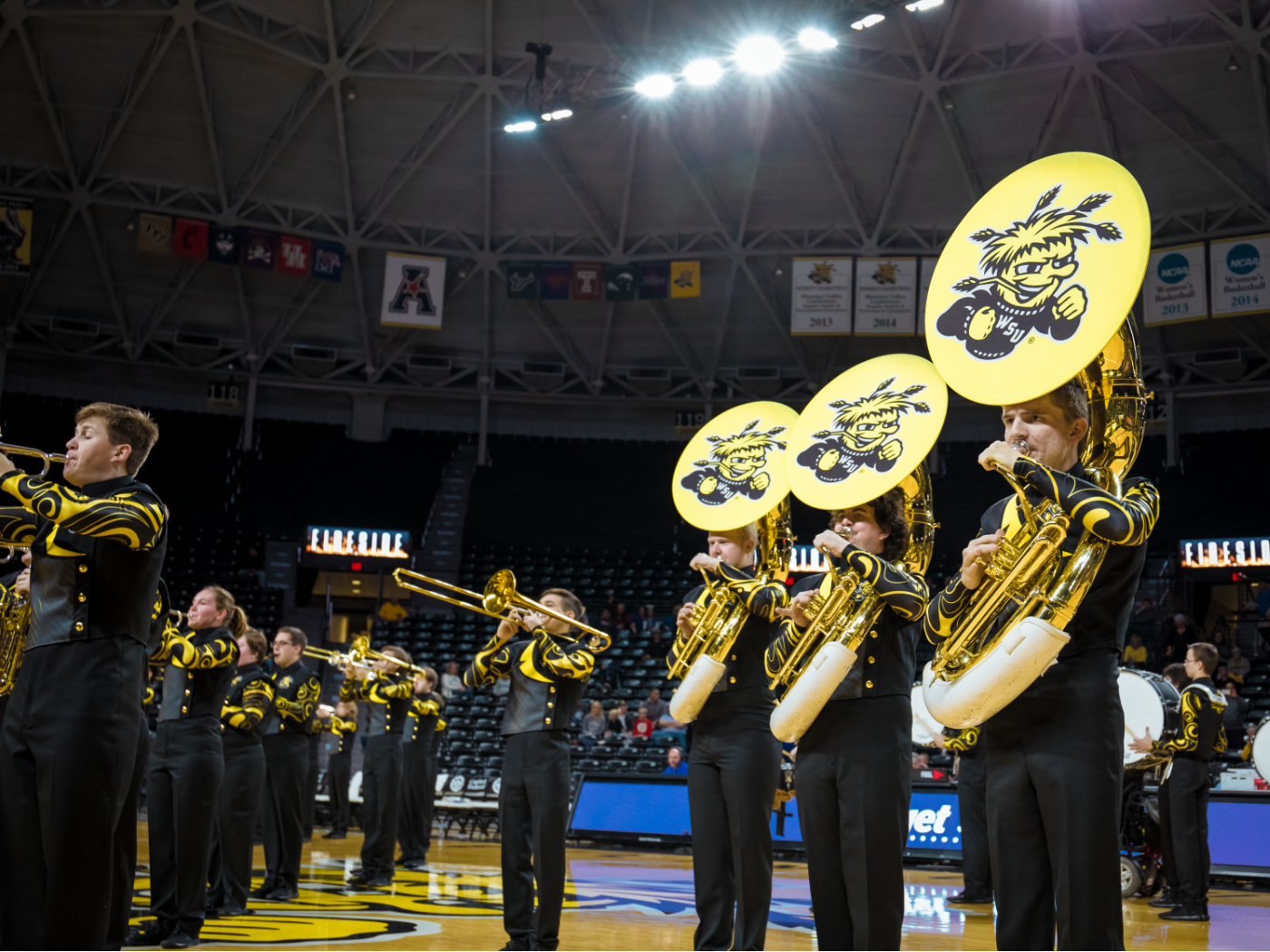 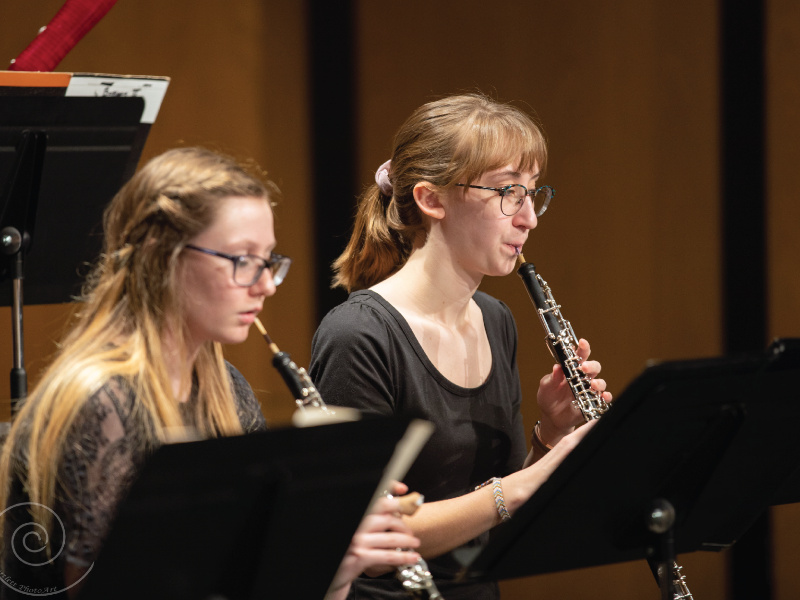 WSU has two concert bands available to students: the Wind Ensemble and the Symphonic Band. These ensembles both include numerous undergraduate and graduate music and non-music majors. While the bands require a placement audition for seating, our goal is one of inclusion – we want to accommodate all non-music majors who desire to continue their instrumental music experience in a university setting. To this end, we will accommodate non-music major students with scheduling issues on a limited basis.

The bands perform both standard and contemporary repertoire. We have performed everywhere from national and regional conferences to New York's prestigious Carnegie Hall.

A Tradition of Excellence

At the turn of the 19th century, Wichita was a growing city with the arts at its core. During this time, several music conservatories, local colleges and professional bands, choirs and orchestras flourished in Kansas. While many colleges and conservatories close their doors after just a few years, several colleges continued to grow and thrive, most notably Fairmount College in Wichita. Fairmount College became the Municipal University of Wichita (WU) in 1962 and Wichita State University (WSU) in 1964.

From its start in 1895, Fairmount College was arts-minded, offering classes in music theory and history along with lessons in voice, piano and orchestral instruments. In 1902 the college established the Music Department. Associated with the Music Department were ensembles, some sponsored by the department, others loosely formed by students and often augmented with community members. It was these fledgling 1902 ad hoc student-community groups that provided the birthright for the infant WSU band. By 1909 the Fairmount College Band was adorned in traditional band uniforms of the day and boasted a membership of twenty students, including three violinists!

In 1924 there was a very active Reserved Officer Training Corps (ROTC) on campus that established an ROTC band. Student musicians directed the ROTC band until 1929 when Otto Culvert was brought to campus to lead the group. This band was organized mainly for the purpose of supplying musical enjoyment to its members and for ROTC functions. In 1930, a Women's Drum and Bugle Corp was established on campus and performed at sporting events and parades. The Women's Drum and Bugle Corp was short-lived, flourishing for approximately four years. The ROTC band continued to grow with the coming years and became known for its fine musical ability. In 1932, Walter Duerksen, after whom the present fine arts center is named, assumed directorship of the ROTC band. He was the first band conductor to be full time in the Music Department. The ROTC band’s main purpose at that time was to supply musical enjoyment, prepare formal concerts and to perform at football games. Duerksen established a second band, not associated with ROTC, in 1939. By 1941, Duerksen was in charge of three WU bands: a ROTC Marching Band, a ROTC Concert Band, and a University Concert Band.

The WU bands were flourishing organizations prior to World War II. With the onset of the war, many colleges and universities experienced declining enrollments as men were shipped over seas. In 1941, the WU bands, in order to bolster enrollments, formally admitted women to the University Band and suspended the ROTC bands. In 1946, James Kerr, who had been a highly successful high school band conductor in Norton, Kansas, became the Director of WU Bands. At the same time, Duerksen became the director of the WU School of Music. Kerr held the post of Director of Bands, with distinction, until 1970.

Under Kerr's legendary leadership, the university bands experienced unprecedented growth in numbers and quality, becoming nationally recognized for excellence both in the concert hall and on the football field. During his tenure, Kerr led the concert bands in regional and national convention performances of the Music Educators National Conference, numerous Kansas state conventions, and was invited to perform at the College Band Directors National Association National Convention. The Marching Band received national recognition for its creative pre-game and half time shows. Kerr, as a result of his work with the WU bands, was inducted into the prestigious American Bandmasters Association, Kansas Music Educators Association Hall of Fame, and was named Outstanding Kansas Band Director by the Kansas Bandmasters Association.

During these transitional periods of WSU Bands leadership, Dr. Donald Corbett, Professor of Music Education, provided stability for the bands. Dr. Corbett, a WSU Bands alumnus and a student of Kerr, served twice as Interim Director of Bands (1979 - 1980 and 1982 - 1983). Corbett retired in 1994 as Associate Director of Bands Emeritus. In 2002 the WSU Bands celebrated their Centennial of 100 years of Excellence.

What is the Shocker Sound Machine? What is a "Basketball Marching Band"?
This ensemble will be about entertainment. Exciting, energetic, high-octane performances - that is what we are looking to create. Although the marching band has been synonymous with football, this ensemble is not really a "Marching Band" in a traditional sense, it is something new! Shocker Sound Machine (SSM) will be a movement-based ensemble that will incorporate traditional and contemporary techniques for movement and sound. Performances could be seen at basketball games, local high-school football games, and other events as they arise.

What kind of community events and parades will the band perform in?
We do not see the Shocker Sound Machine as a traditional militaristic, pageantry style ensemble. Therefore parades, if we perform in them, will not see the band "marching" down the street. It will be something different. Other community events could include pop-up concerts, flash-mobs, private events, pep rallys - we do not quite know yet. At first we will keep the performance schedule small until we can clarify all performance styles of the ensemble.

Will it cost anything to be a member of the Athletic Band Program at WSU?
At this point we see no costs for students in regards to uniforms, instruments, or travel. Starting in academic year 2019-20, there will be a 1 credit course offered each semester that students will be expected to enroll in. We are hoping to offer scholarships to offset the partial or complete costs of course enrollment for as many students as we can.

Will students receive scholarships/stipends to be in the band?
It is our hope that we will be able to scholarship the majority of students in the athletic band program.

Will this take away from the band we already have for games?
No! Shocker Sound will still function as it always has - providing entertainment for the fans and support for our teams at sporting events. Shocker Sound Machine is an addition to the WSU Athletic Bands program and will provide an additional layer and opportunity for our students and program in performance and entertainment.

Do I have to be a music major to participate?
You do not! In fact, we are looking forward to including as many non-majors as possible.

Do I have to be a full-time student?
No! Each member must only be enrolled in at least one class at WSU outside of Shocker Sound or Shocker Sound Machine.

Is there a drum line?
There is!