During the fuel cell operations, the optimal water feed is required for the desired performance, but the optimal state of the water has not been fully understood. This is primarily because it has been challenging to visualize the actual hydration level (both in transient and steady states) in the polymer electrolyte membrane since geometrical and operational limitations. The challenges have led to the limited understandings of the hydrated polymer electrolyte membrane associated with the performance. X-ray tomography has a capability to show both temporal and spatial water distributions in a high resolution, non-destructive visualization technique, and my study elucidates the water distributions at given boundary conditions (vapor-, liquid-equilibrated, and dry), and this is used for the modeling input to improve the fuel cell models.
Some of the produced water at the cathode catalyst layer turns into liquid form, and it fills pores in the porous electrode and catalyst layer. It results in hindrance of the gaseous fuel transport, and this significantly limits the performance. At subfreezing temperatures, the water begins to freeze and grow (during a continuous water production especially at a start up). This results in a complete blockage of the gaseous fuel and the electrochemical reaction sites, causing an operation failure. Thus, understandings of the water characteristic behaviors at the low temperature are crucial to the optimal design and operation. I observe the water at various different water fillings in the subfreezing temperature, and it reveals the water nucleation sites and their growth, associated with pore morphology and wettability. This work leads to a fundamental understanding of the water characteristics in presence of the surface interactions. 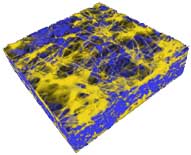