Julio Mendoza was born in Chihuahua, Mexico in 1896 and came to the United States through San Antonio with his mother, Guadalupe, and sister, Aurelia, in 1901 at the age of 5 years. He moved to Wichita Kansas with his mother, sister, stepfather, step brother, step sister around 1912 at the age of 16. He obtained employment in 1913 in the Cudahy meat packing plant where he worked for over 50 years.

The Mendoza family can be traced through the Federal and State census, and City Directories. The 1915 Kansas Census has a separate section for the Mexican families. With in this list is Julio Mendoza with his mother, sister, stepfather, step brother, step sisters. By 1920 Julio had married and taken up residence on North Shelton. By the 1925 Kansas census he had three children - Angelita, Carolina, and Julio Jr. Unfortunately, his wife had died in child birth, which was not all that uncommon even in the 1920s. He soon married Maria Macias, whose family came to the US during the period of the Mexican Revolution from La Pieda, Michoacan, Mexico. 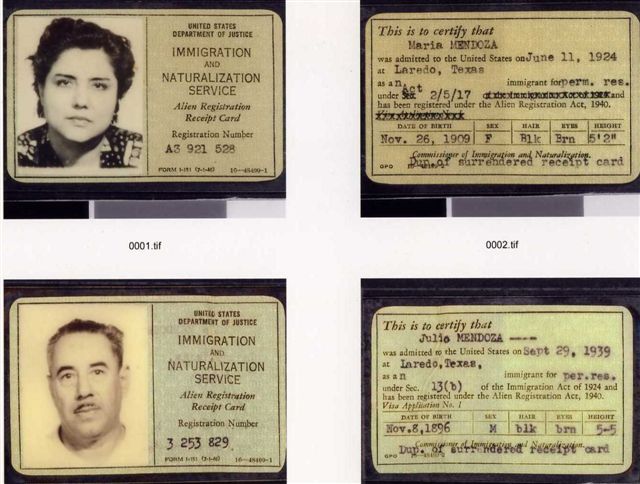 Courtesy of Antia Mendoza and the WSCHM.

As noted in the photographs of Julio and Maria's Immigration document that where issued many years after they came to the United States.

His family continued to grow and by the 1930 census he had three more sons - Charles, Ernest, and Arthur. His youngest son was Javier Anthony (Tony). (photograph of children with the pony) In the early 1940s the family moved from N. Shelton to N. Park Place some 2 blocksfrom Cudahy Meat Packing.

The family was typical of the Mexican immigrants that came to be part of the United States. They were a patriotic family that fully supports their new home land. Julio registered with the selective service for World War I. His sons served in World War II and Korean, three in the Navy and one in the Army. 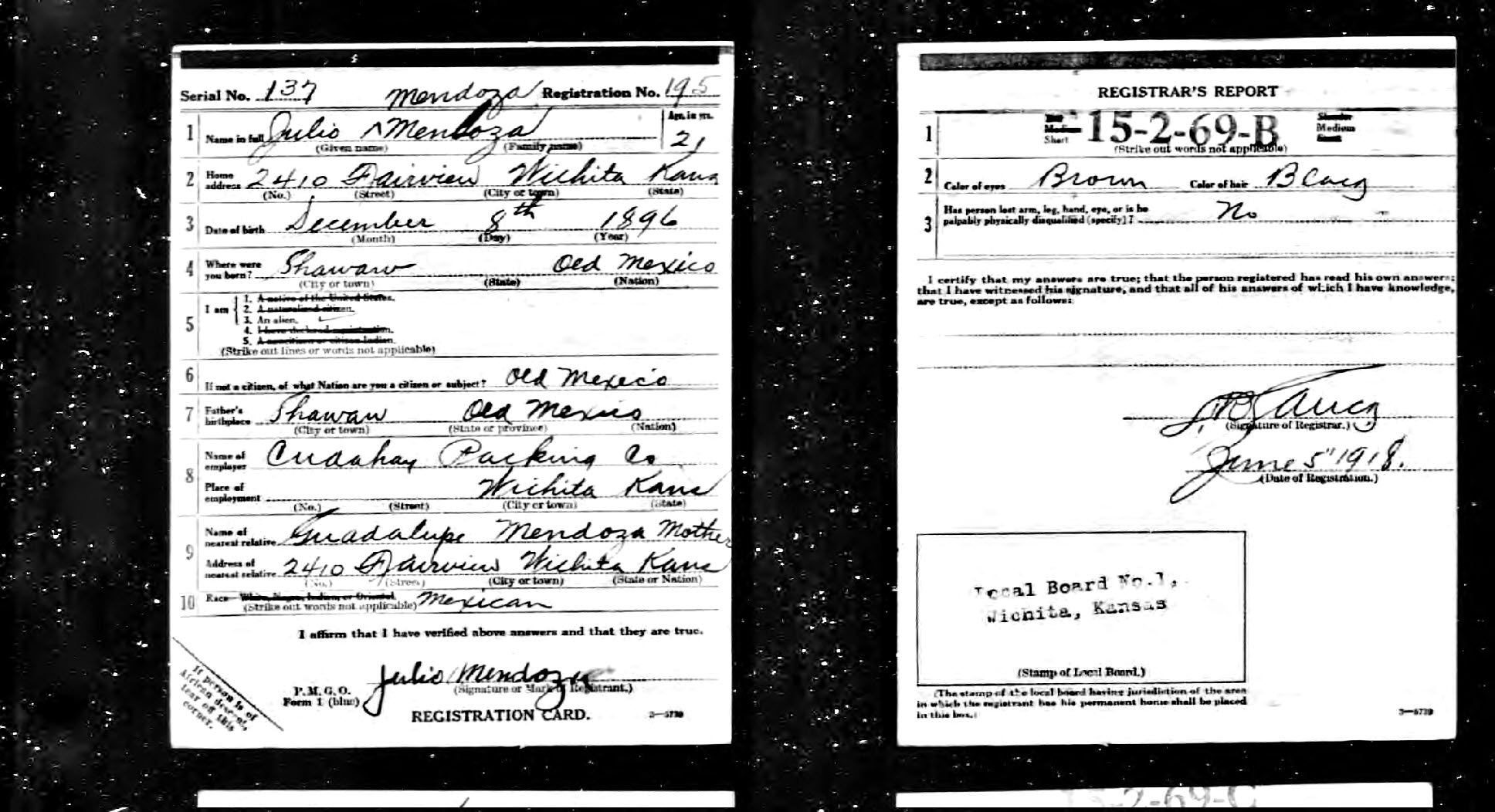 The family attended church at the Our Lady of Perpetual Help. The children attended the church school through the 8th grade and North High. In attending the church school, Julio's children had to learn English. Julio's youngest son related to his daughter stories of the very mean German Nuns that forbid him to speak Spanish. The children would participant in American sports. Tony Mendoza played golf on the North High Golf team. (photo) Tony Mendoza was typical of the times, he dropped out of high school after his junior year and joined the Navy during the Korean War.

As with most Mexican families, Julio's children also married individuals of Mexican descent. Tony married a girl whose family was from the railroad works in Florence and Newton. Typical of first and second generation Mexicans, Tony was industrious. After his discharge from the Navy in 1955 he opened a family carpentry business from his home - Tony Mendoza and Sons. He had many carpentry contracts, including one for the city of Wichita in the mid 1980s to build the Bus Stops. His children remained in the construction business.

Large family networks developed in the community due to the Mexican cultural and the marriages within the community. By the 2nd generation the Mendoza family included the Macias, Ramirez, Del Castillo, Tejeda and Hernandez families. First generation family members had become professionals; with Attorneys, Pharmacists, and Contractors among their ranks.

It should be noted that these families rose from modest means, often having to borrow clothing for special occasions, such as 1st Communion. Most families came to the U.S. from Mexico with very little. One of the few things that have survived in the Mendoza family is a cross that Maria Macias's mother brought with her from Mexico.