There are currently few options for navigational aids for the blind and visually impaired (BVI) in large indoor spaces. Such indoor spaces can be difficult to navigate even for the general sighted population if they are disoriented due to unfamiliarity or other reasons. This project is building and deploying an indoor wayfinding system called GuideBeacon for the blind, visually impaired, and disoriented (BVID) that assists people in navigating between any two points within indoor environments. The GuideBeacon system allows users equipped with smartphones to interact with low cost Bluetooth-based beacons deployed strategically within the indoor space of interest to navigate their surroundings. Preliminary results obtained from field testing GuideBeacon with BVI and sighted participants suggests that it can be used by the BVID for navigation in large indoor spaces independently and effectively.

There are two main directions of ongoing research on this project. First is the GuideBeacon system itself (app interacting with beacons in the environment) to determine proximity to points of interest (PoIs). The second is preparing indoor maps and beacon infrastructure employing computer vision and machine learning techniques through a tool called IBeaconMap.

The technical contribution and novelty of the research on the GuideBeacon system lies in taking an emerging technology (beacons) that is being developed and ubiquitously and inexpensively deployed for sighted users and harnessing it for accessible wayfinding for disoriented sighted users and those who are blind or visually impaired. Quantitative evaluations show that GuideBeacon can cut the time required for the BVI to navigate unfamiliar indoor spaces by 30-50% and cut the associated distance walked by more than 50% in most cases. Qualitative evaluations show a general satisfaction with the UI design and navigation functions while providing valuable feedback for future improvement. These results were from a relatively small indoor space and it can be expected that they can only get better when tested in larger indoor spaces and make a big impact even for sighted but disoriented users. With a user of the GuideBeacon needing only a smartphone device and software apps to interact and gain benefits from the system, it can provide entities managing large indoor spaces with the tools to extend their space to accommodate BVID end users. It is possible that even some current beacon installations for other applications such as proximity based advertising can be re-purposed to allow the use of GuideBeacon.

Early stages of GuideBeacon development was supported by WSU's

A major challenge in deploying beacon-based indoor navigation systems is the need to employ a time and labor-expensive beacon planning process to identify potential beacon placement locations and arrive at a topological structure representing the indoor space. This work presents a technique called IBeaconMap for creating such topological structures to use with beacon-based navigation that only needs the floor plans of the indoor spaces of interest. IBeaconMap employs a combination of computer vision and machine learning techniques to arrive at the required set of beacon locations and a weighted connectivity graph (with directional orientations) for subsequent navigational needs. Evaluations show IBeaconMap to be both fast and reasonably accurate, potentially proving to be an essential tool to be utilized before mass deployments of beacon-based indoor wayfinding systems of the future. We have used LibSVM, Matlab machine learning and image processing toolboxes to implement this project. 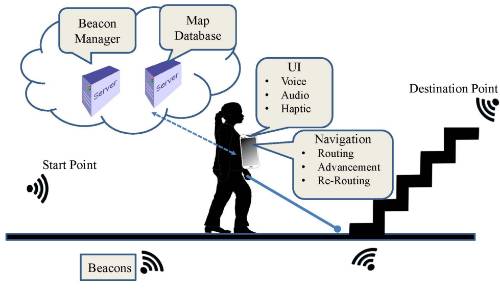 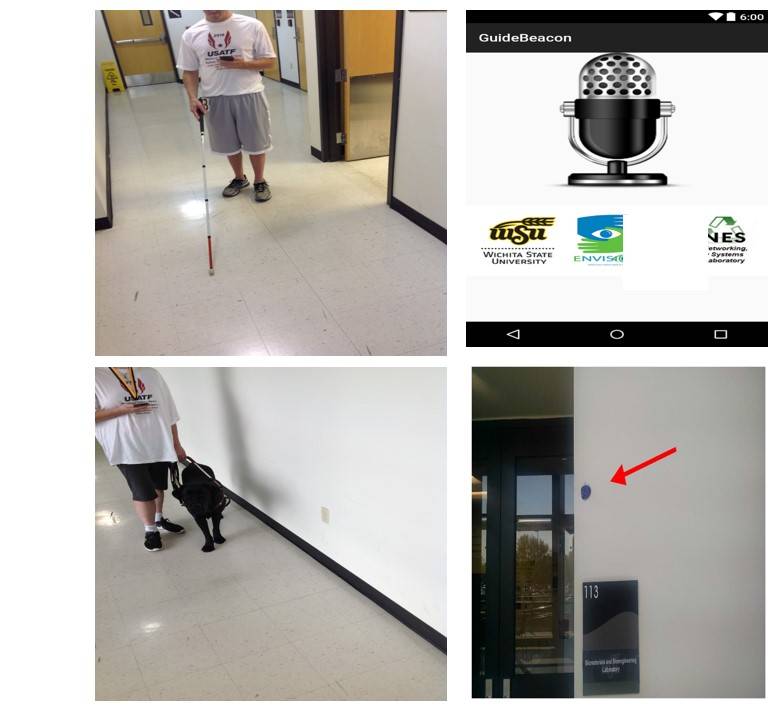 Pictures on the top left and bottom left show a cane user and a dog user navigating using GuideBeacon. The top right picture shows the GuideBeacon app interface while the bottom right pictures provides an example of how a beacon is placed on a wall 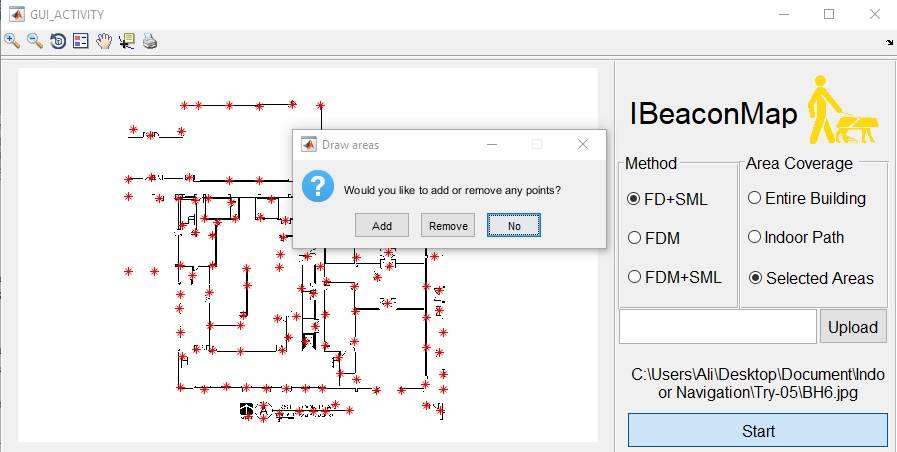